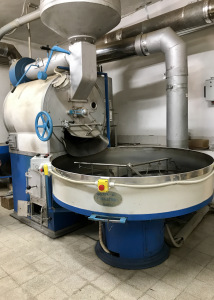 In the small town of Piano Di Sorrento lies Casa del Caffe Giuseppe Maresca, a coffee factory that has been passed down through the generations. Upon walking into the Café you are immediately hit with the heavenly aroma of multiple coffee beans being roasted.

The aesthetic of the factory is vintage in the front, and business in the back. The original brewing equipment is showcased amongst the various homemade products in the entryway of the store. Then, as I was shown the back of the factory, you truly see where the magic happens. A giant machine, that is primarily hand operated, puts the brewing into action. 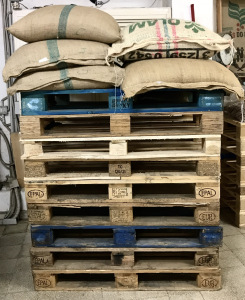 Wood logs are the basis for the process, gently laid into a compartment at the bottom, and then the coffee beans are mixed with a certain fragrance of choice (oranges, lemons, whatever your coffee-loving heart desires). After the beans have absorbed the desired taste you will hear a loud and frantic popping. This means its time to let the beans fly! Well, fly into the bin below, that is.

The beans are quickly circulated through the beans in order to cool and keep all that delicious flavor in. The beans are then grinded for consumer interest or packaged whole for shipment. Throughout the tour, you could see the genuine artistry and interest that goes into each batch. The    business thrives on its familial ties and traditional brewing methods. 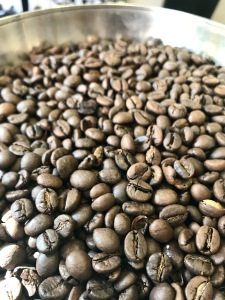 Now for some history on the business: it has been in the industry since World War II and has since flourished in demand. Though the brewing factory may be small in size there is a vast history behind how the company is run as well as how they roast, import, and sell their coffee. Italian businesses are typically passed down through male successors; thus, when Giuseppe’s daughters were born, he decided to wait and continued managing the company.

That is until one of his grandsons, Michele, was born. Michele Gargiulo, who is the current manager, was trained from childhood under his grandfather, Giuseppe Maresca. Rumor has it that his childhood games were largely based on the coffee beans that surrounded him. Michele was taught how to tell a coffee beans specific characteristics and harvesting methods purely through sight.

Three years ago, Giuseppe bequeathed the business to Michele after years of training him. For Michele, his years of preparation have lead to immense success and knowledge of the coffee industry. Through Giuseppe and Michele, the business has gradually expanded and become worldwide. Casa del Caffe imports quality beans for their factory, as they are known not only for how they make their coffee but what goes into it. However, the family brewing secret is not taken lightly- only family and trusted employees learn the delicate process of making the perfect Cup of Joe.

The business has grown to serve dozens of markets in Europe, China, and the United States. The consumer demand is constantly growing, distributed into the States through a representative in California. So have no fear, this delicious coffee is available to all who wish to relish in its aroma and taste.

They say, “you get out, what you put in”. In this case, the Maresca family line has put generations of hard work and passion into their business only to receive support and admiration from all those who taste their unique brews.

Learning About Archaeology in the Shadow of Vesuvius

Meet Ava Crawford, Intern at the ArcheoClub in Massa Lubrense

The Search for Beauty: First Impressions of Sorrento