Come and feel the South

Stories about beauty, travel, itineraries, art, sustainability, innovation, as well as the food and wine experience, to highlight our rich and unique southern Italian cultural heritage.

Even though Pompeii is one of the most popular archaeological sites worldwide, few know that the Archaeological Site of Pompeii also specializes in archaeobotany.

Archaeobotany is a branch of archaeology that studies how plants and trees used to be and how they used to grow in the past.

An interesting example is the study of ancient wine-making processes. 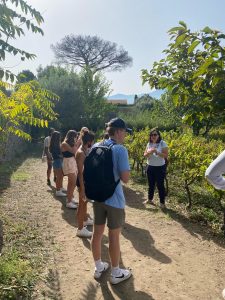 mpeii, with the cast technique, they have managed to find exactly where grapevines were planted 2000 years ago and what type of grape grew in Pompeii.

They then planted inside the archaeological site the same type of grape that grew there 2000 years before.

In September, the grapes are harvested and wine is produced from them by hand (or rather by foot!) with the same methods that were used by the Pompeians – fermented in wine barrels produced with the same wood found during excavations.

1000-1500 bottles of “Villa dei Misteri” wine are produced each year. It is one of the most prestigious wine in Campania, costing more than €100 per bottle.

A Natural Treasure: the Pertosa Grottos

Hidden in the Cilento National Park, located in the province of Salerno in the southern part of the Campania region, are the majestic Pertosa Grottos, also known as the “Angel Grottos.” 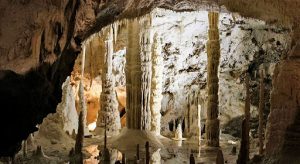 Stretching over a mile and a half, to enter the path on foot you have to first enter by boat to cross an underground river.

It is said that the grottos were formed 34 million years ago with a shape changing over time from water flowing from a duct of the Tanagro river. They were supposedly lived in before the stone age, used by Greeks, then Romans, and then consecrated by Christians for the archangel Michael.

Today there is a place in the grotto used as a theater. It is a very unique experience, especially with the new projection systems that light the theatrical performances.

In 1932 this amazing natural treasure opened to the public, and ever since has been an important location for tourism in our region.

Off the Beaten Path on the Island of Capri 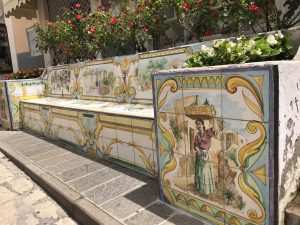 The Isle of Capri is one of the most famous islands in the world, visited by millions of tourists every year. However, even in this popular tourist destination, there are hidden gems, like the The Church of San Michele Arcangelo (the Church of Saint Michael the Archangel) that aren’t as well known or well visited as they should be.

This incredible church was built in Anacapri at the end of the 17th century by the initiative of a nun from Capri, Mother Serafina, as a dedication for her prayers having been answered for the protection of the Austrian empire against the invasion by the Turks. 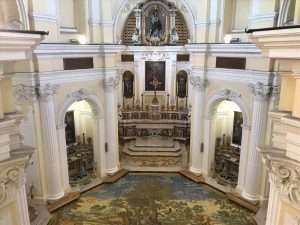 The Church of San Michele Arcangelo features ornate decorations from floor to ceiling—but especially its floor.  In 1761, Leonardo Chiaiese hand painted every tile of the church’s floor to create a massive artwork depicting the expulsion of Adam and Eve from the Garden of Eden. In the past, the church’s pews covered Chiaiese’s masterpiece, but today you can see the majolica tiles exposed in all their glory. You can view them from the ground floor, standing and walking along a wooden beam to help preserve the tiles, or from above on the second floor.

This magnificent tile floor as well as the High Altar were financed by the Prince of San Nicandro, who was also the private tutor to Ferdinand IV of Bourbon, who later became the the King of Naples and Sicily. On each side of the alter sits an angel, each carved from a single piece of marble.

To visit this cultural treasure costs a mere two Euros and is located in Piazza San Nicola, just a short walk from anywhere in Anacapri.

Street Art Made in Naples 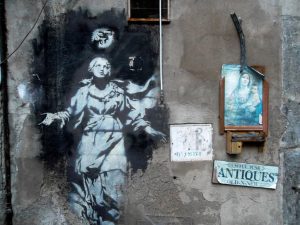 Not only baroque, Vesuvius, and pizza. Once the capital of a kingdom, Naples boasts a bountiful contemporary art scene, rich in creative street art. A contemporary, young and biting Naples, which is designing new itineraries in the city. Large murals, stencil paintings, poster art, and graffiti make up a widespread web of artwork, which change the face of entire buildings, tell stories, and send messages.

The Patron Saint, a cult icon, returns in large dimensions painted on the facade of a building at the end of Spaccanapoli: it is a piece of art by Neapolitan street artist Jorit Agoch, who has been decorating the city of Naples and the province with a series of striking hyper-realistic murals on historical and contemporary characters, with a strong political significance. Powerful faces that wear two red stripes on their cheeks as a distinctive sign, a sort of tribal scratch with which the artist marks his human tribe all over the world.

Jorit started out as a graffiti artist, tagging walls and creating pieces influenced by the street-art scene in the USA. He combines the energy and vitality of old-school hip-hop with the historical style of Italian Masters. In his own words: “Graffiti is the voice of protest and popular anger that, from the ghettos of the big metropolis, demand being heard.” 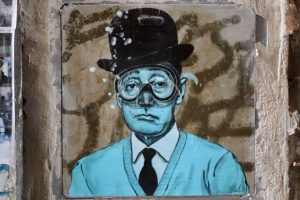 Artists from all over the world have been inspired by the crumbling walls of Naples and have expressed their inspiration on the city’s ancient facades, adding modernity and creativity all whilst respecting and maintaining the city’s ancient and honorable past intact. Banksy, one of the most famous street artists in the world, donated the mural “Madonna with a Pistol” to Naples, placed at the foot of the Girolamini Church. The British artist, whose identity is still unknown, represented an ecstatic Madonna with a gun instead of a halo. Endlessly surprising and charming, Naples is a city that radiates an elegant and slightly decadent beauty, with Baroque monuments at the most improbable street corners; however, equally captivating is the power of Naples’ street art that over the years seem to have become an
integral part of its identity.

Naples: The Most Cinematic City in the World

The magnificent Royal Palace, the historic center, Mount Vesuvius, the Ovo Castle – Naples, with its breathtaking views and popular sites such as these, has always been a privileged natural setting for television and film productions. Few places in the world can boast such an impressive array of unique locations.

Defined by Vittorio De Sica as “the most cinematic city in the world”, Naples is an open-air set since the beginning of the history of cinema: it was immediately filmed by the Lumière Brothers at the end of the nineteenth century, and home to the first production houses and cinemas in Italy.

Over the years, filmmakers have taken advantage of the city, making it the location for their movies – for its beauty, of course, for its artistic tradition for music and theatre, and mainly for its overflowing stories and passions, represented in both comic and dramatic art.

Naples has been widely represented in national and international cinematography: great directors have succeeded in capturing its essence over the years, with the films of Mario Monicelli, Roberto Rossellini, Pier Paolo Pasolini, Ettore Scola, Dino Risi, etc. It hosts a cinematic tradition that has been revived in recent years with the works of Mario Martone, Antonio Capuano, and Ferzan Özpetek.Even the Oscar winner and amazing storyteller Paolo Sorrentino has decided to return to his hometown of Naples to shoot theintimate and personal drama “The Hand of God,” about his youth in 1980s Naples, a Netflix Italian original to be presented in September at the Venice Film Festival.

Naples has kept its beauty intact and the city will never cease to have its natural scenography, a forge of ideas, and its infinite stage of situations and feelings – fantasy and irony, ancient wisdom and great euphoria, but also solidarity and suffering.

If you love cinema, you just can’t miss the opportunity to join our course History of Italian Cinema and experience how the contradictive energy released by the city has been able to produce a priceless heritage of images for cinema. 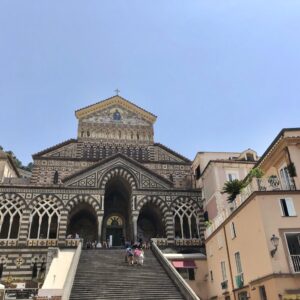 After the pandemic, travelers will increasingly choose nature tourism – living outdoor experiences, participating in excursions that lead to more direct contact with the surrounding environment, and paying attention to the well-being of the planet. The Amalfi Coast, magically suspended between the blue sky and the iridescent sea, is heading its tourism in this direction to continue enchanting visitors.

To protect this naturally wonderful landscape, The Amalfi Coast Tourism District is implementing a large project focused on sustainable mobility to promote electric vehicles, micro-mobility and the installation of e-charging stations.

The main aim of the initiative is to reduce the environmental impact and congestion resulting from the vehicle traffic on the road, as well as to support commuting residents. Moreover, the use of electric scooters along the coastal road will enhance the experience of those who visit the Amalfi Coast.

There is a valuable experimental program in responsible tourism called Authentic Amalfi Coast, a portal that aims to propose alternative and lesser-known travel destinations. The goal is to make the coast smarter and support the culture, tourism, and sustainability of the territory, providing information and services, experiences like rentals, agri-food, trekking as well as sustainable mobility operators.

Also on its way is a pedestrian and cycle path project, about two kilometers long, to enjoy an extraordinarily breathtaking view of the “Divine Coast.”  It will connect Amalfi and Ravello, passing through the beautiful village of Atrani. This incredible touristic route, with a low environmental impact, will be built on the outer stretch of the coast, overlooking the sea and safeguarding people walking or cycling along the Amalfi coast.

The tiny, beautiful island of Procida has recently won the title of Italy’s Capital of Culture for the year 2022, becoming the first-ever island to do so since the award was established in 2014.

Located in the Gulf of Naples, the vibrantly colorful Procida is a small island with no more than 10,000 inhabitants and a long history that dates back to around the 15th century BCE. 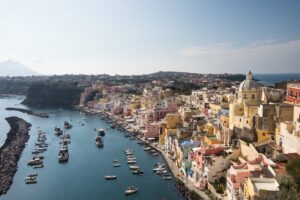 Its colorful houses, typical of the Mediterranean area, have inspired writers and filmmakers alike– from ancient Roman poets like Virgil to modern-day authors like Elsa Morante, whose Arturo’s Island is set right on Procida; to directors like Michael Radford and Anthony Minghella, who filmed their respective movies Il Postino and The Talented Mr Ripley on the island.

The proposal that earned the island the award La Cultura non Isola – Culture does not Isolate – is capable of conveying a poetic message, a vision of culture that reaches out from the tiny reality of an island as a well-wish for all of us, especiallyfor our country in the months to come.

The cultural-based, local development project of Procida as the Italian Capital of Culture 2022 has been recognized as a European good practice and included in the peer learning program of the Cultural Heritage in Action project of the European Commission.

Long live Procida as it will accompany Italy and the Campania Region in the year of its rebirth.