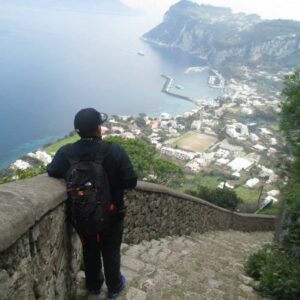 “As a first generation college student who seldom traveled, it was not easy to leave all that I knew behind to live halfway across the world for several months; however, the support I received from faculty/staff members of the Sant’Anna Institute and the friendships established while there, made the entire experience worth it! While partaking in my internship, I was empowered and challenged to bring new ideas to improve the overall organization’s marketing and communication’s strategy – which led to the creation of Sant’Anna’s original blog as an example. Furthermore, I was exposed to an entirely different culture and how life can differ abroad, authentically. These experiences paved the way for me to truly understand how cultural differences can apply in the workplace as well, which is pivotal to finding success when working in a global organization such as Bloomberg LP. When I initially interviewed for Bloomberg, at least 80% of the conversation was related to my experiences abroad, and I can confidently say that if it were not for my experiences with the Sant’Anna institute, I may not be where I am with my career today. Thank you to Cristiana Panicco, Dianne Clark (Tuzzolino), and the entire Sant’Anna faculty/staff for the life-changing experiences in Sorrento. I hope to see you all again soon!=
Steve Pinell, Sant’Anna Institute Alum (Spring 2014)
Bio
Born and raised in New York City, Steve Pinell is a first generation college student who attended SUNY Alfred State College of Technology between 2008-2014, where he was actively involved on campus beyond academics, as a member of the NJCAA DIII Baseball Team, WETD 90.7FM Radio Station, and Kappa Sigma Epsilon Fraternity among other organizations. Through SUNY Alfred’s partnership with the Sant’Anna Institute in Sorrento, Italy, he was offered the opportunity to participate in the study abroad program in the Spring 2014 semester, where he partook in an internship as a Marketing and Communications Manager for the institute. He graduated at the end of the Spring 2014 semester with a Bachelor’s of Business Administration (minoring in Global Studies) and an Associates of Applied Science in Computer Information Systems.
Following Steve’s graduation from Alfred, he remained involved with the Sant’Anna Institute as an ambassador for the program, having attended Global and Regional study abroad conferences (such as NAFSA) alongside the Sant’Anna Institute’s Founder and President, Cristiana Panicco, where he had the opportunity to speak on his experiences abroad, helping to establish new partnerships for the organization along the way. In parallel, he kicked-off his career in New York City with Bloomberg LP (a Global Financial News, Data, and Analytics Technology Firm) in December of 2014 as a member of the Technical Operations – Bloomberg Terminal Installations Team in the Americas region. It did not take too long before his contributions began to be recognized as as he was promoted to regional trainer, regional team leader/manager, followed by Global Product and Program Manager for the Implementation Specialists group in a span of 3 years. In the summer of 2018, Steve moved into his latest role at Bloomberg where he currently serves as a Senior Scrum Master and Project Manager on the Global Information Security PMO team, where he is primarily focused on Security Engineering related initiatives for the organization. He is also an active member of the larger Agile Community and Bloomberg Latinx Community’s Leadership Team (an Employee Resource Group) which spearheads company-wide Diversity and Inclusion initiatives focused on attracting, advancing, retaining, and empowering Latinx talent at Bloomberg.

“L’arte di arrangiarsi”, The Experience of an Italian American